To illustrate the unprecedented current environment on Capitol Hill, the recently released Senate legislative calendar for 2020 includes a blank space for the month of January. Of course, the big unknown is the possible Impeachment Trial, which may take up much of the month. 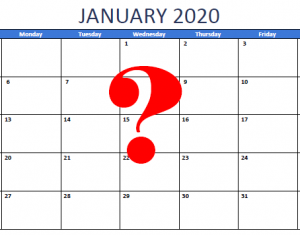 Ironically, January may provide a fruitful time to lobby the Senate. All the Senators will be required to be in their seats on the Senate Floor each day of a trial, from noon to 6pm, six days a week.  Senate hearings may be held each morning before the noon call to order.  Additionally, the House plans to be in session much of the month of January.

While the media may be focused on the impeachment trial, The Nonprofit Alliance will continue to meet with Senators, House Members, and their staffs to carry the message of the nonprofit community.

The Unrelated Business Income Tax (UBIT) provision that was part of the 2017 Tax Reform Act places a 21-percent tax on parking and transit benefits that nonprofits provide to employees.

It appears that the two tax-writing committees in Congress, the House Ways & Means Committee and the Senate Finance Committee, are now in agreement on an overall tax package which will include the repeal of the UBIT provision. If you have contacts on the Hill, and especially in the Congressional Leadership, please contact them as soon as possible to urge repeal.

Following are the Leadership of the House and Senate:

Below are some messaging points to help frame your communications:

If you have questions, please email Mark Micali, TNPA’s Vice President of Government Affairs at mmicali@tnpa.org.

Over the last few months The Nonprofit Alliance has conducted more than 40 meetings on Capitol Hill calling for repeal of this provision.

Colorado – Democratic Attorney General Phil Weiser said in an interview that his state should enact a California-like privacy law to hold tech companies accountable for consumer harms and would like to increase his office’s enforcement powers.

California – On December 6, TNPA filed our comments to California Attorney General Xavier Becerra on the Attorney General’s Proposed Regulations to the California Consumer Privacy Act (CCPA). Specifically, TNPA is concerned that the draft regulations in their current form will negatively impact the nonprofit community and its ability to provide important services to Californians and others. In their current draft form the regulations will add costs to nonprofits’ operations, resulting in fewer funds available to carry out important missions. In fact, nonprofits could face a downward spiral of ever-increasing fundraising costs as the cost of compliance to CCPA raises the overall cost of data, leaving fewer dollars to provide services.

If you would like a copy of TNPA’s comments, please email Mark Micali at mmicali@tnpa.org

TNPA is asking the NY Legislature to instead request that their Congressional delegation – two Senators and 27 House Members – support a bipartisan national privacy standard that protects consumers’ personal information and provides a clear, uniform national standard for the use of their data.

New York – AB 8828, sponsored by Rep. Anthony D’Urso (D-Port Washington) was referred to the Assembly Governmental Operations Committee on November 25. The bill would require all charitable solicitations to include a statement indicating what percentage of the organization’s proceeds are applied to such charity’s stated mission.