Only seven state legislatures are still in regular session. Now that the dust has pretty much settled, lobbyists and legislators are beginning to plan their next moves. 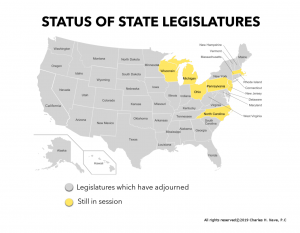 The Council of State Governments (CSG) is scheduled to meet December 4-7 for its national conference in sunny Puerto Rico. On December 4 and 7, the Shared State Legislation (SSL) Committee will debate which bills to include in the 2021 Shared State Legislation Volume. The committee examines bills that have become law in one state and determines if they would be ripe for consideration in others. While the SSL committee does not recommend that states pass any of these laws, it does publish a list of bills that states should consider on several different topics.

New York – SB 6848, sponsored by Sen. Kevin Thomas (D-Garden City) was referred to the Senate Rules Committee on November 14. The bill would require the annual registration of data brokers with the attorney general. The bill would define a data broker to mean a business that knowingly collects and sells to third parties the personal information of a consumer with whom the business does not have a direct relationship but would exclude consumer reporting agencies, financial institutions covered by the Gramm-Leach-Bliley Act and entities covered by the insurance information and privacy protection act. The bill defines personal information to include any information concerning a natural person which, because of name, number, personal mark or other identifier, can be used to identify the natural person. A data broker would be required to pay a registration fee and provide the following information:

The bill would take effect the January 1 after becoming law.

Federal – A new privacy bill, H.R. 4978, was recently introduced by Congresswoman Anna Eshoo (D-CA).  Among the various provisions in the bill would be the creation a new federal agency, the US Digital Privacy Agency, which would effectively limit the FTC’s long-standing federal privacy oversight. The bill does not include a federal preemption of state privacy laws. Further, the bill would permit a private right of action, allowing for class action lawsuits.

H.R. 2013, the Information Transparency and Personal Data Control Act, was also recently introduced by Congresswoman Suzan DelBene (D-WA). The bill has gained 30 cosponsors. The DelBene bill preempts the CCPA and any future state privacy laws which may be enacted. The legislation also calls the FTC to issue regulations, as well as enforce the act.

We’re watching each of these closely; bills are moving more slowly than usual on Capitol Hill these days, particularly in the House.

There is some buzz on Capitol Hill about a possible Senate hearing on data privacy in early December.  Previously it was expected in early November.  A date has not yet been set.

As we approach year end, momentum continues to grow for the repeal of the onerous UBIT provision, which places a 21% tax on nonprofits for transportation (parking and transit) reimbursement. The Nonprofit Alliance recently joined 115 national and regional tax-exempt organizations in writing the bipartisan leadership of the House and Senate calling for the repeal of the UBIT provision.

We continue to look for a legislative vehicle to attach the UBIT repeal; there is a reasonable chance the repeal provision could be added to one of the funding (appropriations) bills currently under consideration.

The Office of the New York State Attorney General issued the following statement on 18 November:

“The Attorney General’s Charities Bureau has received inquiries asking whether organizations that register with the Charities Bureau must submit a copy of the complete Schedule B (List of Contributors) to their Internal Revenue Service Form 990. This guidance confirms that there has been no change to the New York filing requirements for organizations that also file a federal Form 990: New York registrants must attach complete copies of all schedules to their federal form as part of their annual, New York CHAR500 filing, including (if applicable) a Schedule B that lists the names and addresses of the organization’s substantial contributors and the amounts they contributed.”