California has finally adjourned, and Governor Newsom has less than a month to sign or veto some late passing bills.  Of the other states still in session, Massachusetts has a couple pending bills of interest for the nonprofit community, including one that would cap executive salaries. 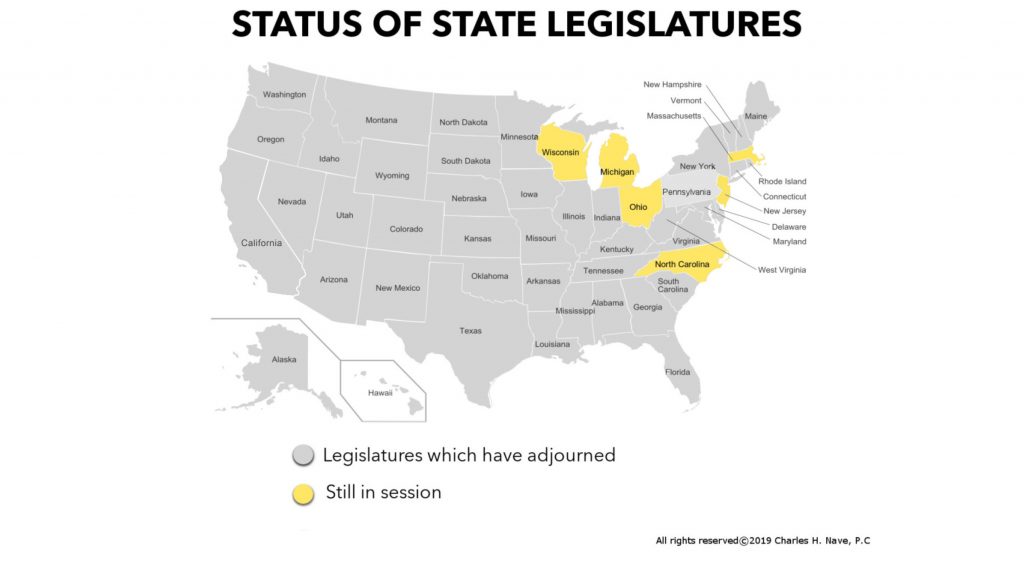 California AB 1181.  As we’ve previously shared, this bill would require a noncash drug/medication, medical device or medical supply contribution restricted for use outside the United States to be valued using the fair value or a reasonable estimate of fair value in the end recipient market(s). Recent amendments allow the Attorney General to adopt regulations carrying out the bill’s provisions.  The bill was also amended to delay the effective date of the noncash contribution reporting requirements until January 1, 2021.

This amendment provides the nonprofit community some time to comply with what promises to be a significant accounting problem.  It also allows FASB additional time to recommend a single national standard to update the current GIK reporting requirements, which the California Attorney General could consider.  The Nonprofit Alliance, National Association of State Boards of Accountancy, American Institute of CPA’s, and FASB submitted letters to the Governor asking him to veto this bill and instead seek a solution that would enable transparency, consistency, and compliance with GAAP.

Following is a summary of the various California Consumer Privacy Act (CCPA) bills that were still in play during the final weeks and days of session:

California AB 25 is now pending delivery to Gov. Gavin Newsom who will have until October 14 to sign or veto the bill. The bill will provide an exception to existing CCPA requirements by allowing a business to require authentication of a consumer in order to verify consumer requests. The bill also authorizes a consumer to bring a private civil action against a business that fails to implement reasonable security procedures if that failure results in unauthorized access and exfiltration, theft, or disclosure. It exempts information collected by a business as part of a job application or in the course of the individual’s employment from most provisions of the law with the exception of the civil action provisions noted above. A previously adopted Senate floor amendment would make the bill operative only if various other CCPA clean-up bills are also enacted and make various other conforming changes.

California AB 846 was ordered to the inactive file at the request of Sen. Hannah Beth-Jackson, Senate Judiciary Committee Chair, on September 12 and did not pass prior to the legislature’s adjournment on September 14. The bill will be considered again during the 2020 session. The bill would modify the CCPA to specify that it does not prohibit a business from offering a different price, rate, level or quality of goods or services if the offering is in connection with a consumer’s voluntary participation in a loyalty or similar program or the offering is directly tied to the collection, use or sale of the customer’s data. The bill would prohibit a company from offering loyalty or similar programs that are unjust, unreasonable, coercive or usurious in nature. The bill would prohibit a business from selling information collected as part of a loyalty or discount program. A recent Senate floor amendment would specify that a business may sell a consumer’s personal information collected as part of a loyalty program if they obtain the consumer’s express consent and the third party only uses the information to identify the consumer as an eligible member of the loyalty program.

Interestingly, this is the bill that months ago was predicted to be an easy win because the clarifications would preserve customer loyalty programs, like airline miles and grocery store points, which were never intended to be impacted under the new law.

California AB 874 is now pending delivery to Gov. Gavin Newsom and he will have until October 14 to sign or veto the bill. The bill will create a public record exemption from the definition of “personal information.”  This bill also captures a revision to the definition of “personal information,” inserting the word “reasonably.”  Whereas the current law defines personal information as that which is “capable of being associated” with an individual or household, this bill will revise it to “reasonably capable of being associated.” A recent Senate floor amendment would make the bill operative only if AB 1355 is enacted first.

The single word addition of “reasonably” is a change The Nonprofit Alliance strongly supported in another bill, AB 873, which did not pass the Senate Judiciary Committee.  The inclusion of that word here can prevent unnecessary reassociation of data with an individual or household, which would add substantial compliance cost and actually increase risk to the consumer.  However, “reasonably” still begs clarification.

California AB 1202 is now pending delivery to Gov. Gavin Newsom and he will have until October 14 to sign or veto the bill. As amended, this bill will require data brokers to register with, and pay a registration fee to, the attorney general on an annual basis. It also will require the AG to make this information available online. “Data broker” is defined in the bill as a business that knowingly collects and sells to third parties the personal information of a consumer with whom the business does not have a direct relationship. The term does not include consumer reporting agencies, financial institutions, or insurance information companies.

California AB 1355 is now pending delivery to Gov. Gavin Newsom and he will have until October 14 to sign or veto the bill. This bill clarifies that “personal information” does not include de-identified or aggregate consumer information. It will also prohibit from discriminating against a consumer for exercising their rights under CCPA except if the differential treatment is reasonably related to the value provided by the data. A business will also be required to disclose to consumers that they have a right to request specific pieces of information and to request the deletion of the information. The amendment will authorize a consumer whose specified non-encrypted or non-redacted personal information is subject to an unauthorized access and exfiltration, theft, or disclosure as a result of a business’s failure to implement reasonable security practices to institute a civil action.

California AB 1564 is now pending delivery to Gov. Gavin Newsom and he will have until October 14 to sign or veto the bill. The bill will require businesses to make available to consumers a toll-free telephone number and mailing address, or email address for online only businesses, for submitting requests for information required to be disclosed. Previous versions of the bill required a physical address.

The Attorney General’s Office has indicated that CCPA compliance regulations may be issued sooner than expected, potentially even within the next few weeks.  Two key pending items: Clean-up of the household issue, where disclosure of personal information at the household level could create privacy risk, and guidance for businesses on determining a verifiable request for personal data.

Massachusetts SB 986 would cap the compensation for charity executives and boards of directors at $500,000.

It is unclear at this point if any action will be taken on either bill.

Fundraiser and Proud: Built on Trust

There is good reason to stand tall and take pride in being a fundraiser. Not…

Only seven state legislatures are still in regular session. Now that the dust has pretty…

Just because we’re experts at fundraising doesn’t mean we’re great managers or leaders. Yet most…