Legislative season is winding down as every state legislature, except California’s, is no longer debating bills of interest to the nonprofit and fundraising community. Most legislatures have adjourned their regular sessions altogether. California is still considering bills concerning gifts-in-kind and data privacy. At the federal level, Congress will return on September 9th from its August Recess and is expected to be in session for the rest of the year. 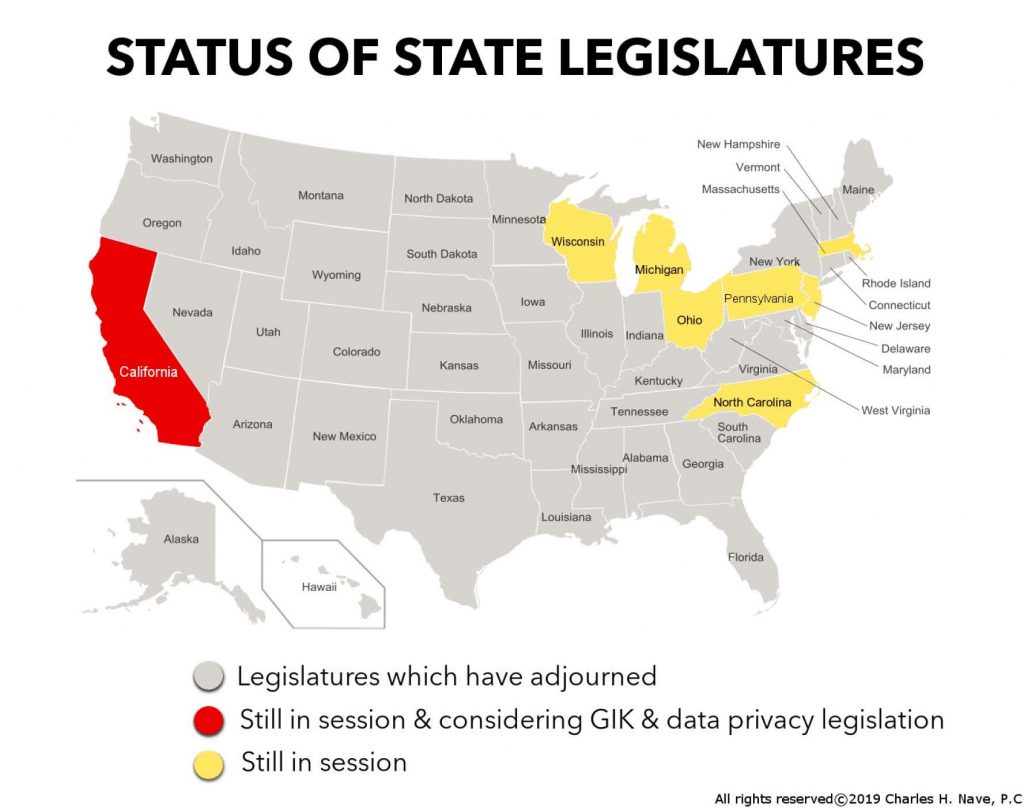 California AB 1181 has been scheduled for a hearing in the Senate Appropriations Committee on August 12 at 10:00 AM. The bill would require financial records of charitable solicitations to be maintained according to generally accepted accounting principles (GAAP) of the Financial Accounting Standards Board or Government Accounting Standards Board. Despite the GAAP requirement, it would also require a noncash contribution received by a charitable organization restricted for use outside the United States to be valued using the fair value or a reasonable estimate of fair value in the end recipient market. The bill would not apply to noncash grants awarded by state, federal or other U.S. agencies that provide valuations for their noncash grants to the charitable organization.

California AB 25 has been scheduled for a hearing in the Senate Appropriations Committee on August 12 at 10:00 AM. The bill would provide an exception to existing CCPA requirements by allowing a business to require authentication of a consumer in order to verify consumer requests. The bill would also authorize a consumer to bring a private civil action against a business that fails to implement reasonable security procedures if that failure results in unauthorized access and exfiltration, theft, or disclosure. It would also exempt information collected by a business as part of a job application or in the course of the individual’s employment from most provisions of the law with the exception of the civil action provisions noted above.

California AB 846 passed the Senate Judiciary Committee with amendments on July 11 and is now pending in the Senate Judiciary Committee. The bill has been scheduled for a hearing in that committee on August 12 at 10:00 AM. As amended the bill would modify the California Consumer Privacy Act to specify that it does not prohibit a business from offering a different price, rate, level or quality of goods or services if the offering is in connection with a consumer’s voluntary participation in a loyalty or similar program or the offering is directly tied to the collection, use or sale of the customer’s data. The bill would prohibit a company from offering loyalty or similar programs that are unjust, unreasonable, coercive or usurious in nature. The amendment would prohibit a business from selling information collected as part of a loyalty or discount program.

California AB 874 has been scheduled for a hearing in the Senate Appropriations Committee on August 12 at 10:00 AM. The bill would create a public record exemption from the definition of “personal information.”

California AB 1355 has been scheduled for a hearing in the Senate Appropriations Committee on August 12 at 10:00 AM. This bill would clarify that “personal information” does not include deidentified or aggregate consumer information. It would also prohibit from discriminating against a consumer for exercising their rights under CCPA except if the differential treatment is reasonably related to the value provided by the data. A business would also be required to disclose to consumers that they have a right to request specific pieces of information and to request the deletion of the information.

Nevada SB 220, following in California’s wake, passed their own law that gives consumers the right to opt-out of the sale (“for monetary consideration”) of their personal information using a designated email address, website address, or toll-free phone number to submit a request. The law is effective October 1, three months sooner than CCPA.  The Nevada State AG’s Office is responsible for enforcement with fines up to $5,000 per violation.

Federal: Work on national privacy legislation, which would preempt the California privacy statute (as well as any other state privacy statute which may be enacted) has focused exclusively on the Senate, with the House having so far shown no appetite to take on this issue. In terms of the Senate, the key committee of jurisdiction is the Commerce Committee, where the so-called “Gang of Six” continues to work on drafting a national privacy statute. The Gang of Six consists of the following members of the Commerce Committee – Senators John Thune (R-SD), Roger Wicker (R-MS), Jerry Moran (R-KS), Maria Cantwell (D-WA), Richard Blumenthal (D-CT), and Brian Schatz (D-HI).

Repeal of the UBIT Provision

Federal: On June 20 the House Ways & Means Committee passed a tax extenders package, which included the repeal of the 21% tax on certain employee benefits — the UBIT provision which forces nonprofits to pay a tax on benefits they provide their employees, such as parking and transit. It appears there is sufficient support in the House to pass the tax extenders package later in the year. There has been no action as yet in the Senate on a similar package of tax extenders.

To date, The Nonprofit Alliance has conducted over 30 meetings in Senate offices advocating support for the repeal of the onerous UBIT provision.