Congress returned from its July 4th recess with much to complete before it adjourns for its long August recess, likely sometime early in the month.  As the map below clearly displays, only a few states are in regular session. An additional handful are in recess due to Covid-19. In those states, resumptions on specified dates are far from certain.  But we’ll start this month with some interesting sales tax discussions in the District of Columbia. 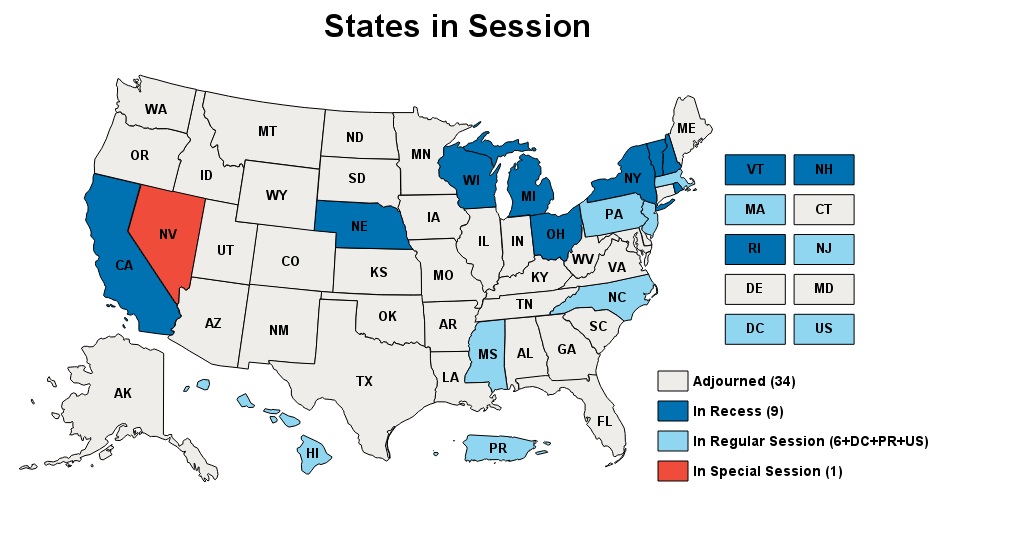 Washington, DC – In its initial consideration of DC’s budget act for FY 2021, observers were surprised by a handful of new taxes proposed by City Council (on July 7), among them the “Advertising and Personal Information Tax Amendment Act of 2020.”

If enacted, the law will add advertising and personal information to those items explicitly subject to DC’s sales tax (the usual DC rate is 6% – these new items would be taxed at 3%).  The definition of “personal information” is more or less standard.  By contrast, that of “advertising” is expansive and therefore problematic.

The Council acts today to make the legislation permanent, subject only to the Mayor’s veto. The DC business community and trade association community is opposing with vigor, arguing that this is a very bad time to be imposing new burdens.

As an association focused on protecting the nonprofit sector, TNPA’s primary concern is the effect on DC’s many nonprofits.  You may have seen early alerts from concerned associations noting that there is no nonprofit exemption.  While there is not an explicit nonprofit exemption in the tax amendment, based upon information available to us from the legislation and DC law, TNPA’s analysis is different.  We believe the exemption from sales tax for nonprofits contained in the DC Code pertains to all of the many sales taxes elaborated in Chapter 20, Gross Sales Taxes.  The newly proposed taxes would be just two among many.  The existing exemption for nonprofits found in §47–2005(3) in effect assures that practically any DC-located 501(c)(3) which applies for exemption from sales tax will receive it.  (Note: The exemption likely does not extend to 501(c)(4) and (c)(6) organizations.)

Please get in touch with TNPA’s General Counsel Bob Tigner, rtigner@tnpa.org, if you have any questions.

This is stricter than the former definition of “personal information.” In addition to the traditional points that normally fall under this description, like SSN or financial information, it also includes precise geolocation, race/ethnicity, religion, and more.

When CCPA was introduced and implemented, there was concern that there was not enough budget or manpower to fully enforce compliance. The formation of this agency would address that concern and will be funded in part by penalties assessed for non-compliance.

CPRA extends the moratorium on employee data until at least 1/1/23. Under CCPA, it could expire as soon as 1/1/21.

Under CPRA, private right of action is expanded to include breaches that provide unauthorized access or disclosure of an email address and password or security question.

California AB 846 was amended on June 25 and is now pending in the Senate Public Safety Committee (more on that committee assignment in a moment).  As originally introduced the bill would have modified the California Consumer Privacy Act to specify that it does not prohibit a business from offering a different price, rate, level or quality of goods or services if the offering is in connection with a consumer’s voluntary participation in a loyalty or similar program or the offering is directly tied to the collection, use or sale of the customer’s data. The bill would have prohibited a company from offering loyalty or similar programs that are unjust, unreasonable, coercive or usurious in nature, and would have prohibited a business from selling information collected as part of a loyalty or discount program.

However… the bill as amended no longer relates to privacy and instead relates to police reform.  This is the result of a “gut and amend,” which the California Legislative Counsel defines as “amendments to a bill [that] remove the current contents in their entirety and replace them with different provisions.”

TNPA will no longer be tracking AB 846.

The amendments would make numerous changes including specifying that in order to determine good standing a fundraising platform could rely on electronic lists periodically published by the IRS, Franchise Tax Board and the Attorney General’s Registry of Charitable Trusts. It would also require a disclosure that a recipient charitable organization could not receive grants or recommended donations with an explanation identifying the circumstances under which that could happen.

The Senate continues its consideration of the $3 Trillion Health and Economic Recovery Omnibus Emergency Solutions (HEROES) Act. The House-passed bill effectively represents the starting point for negotiations with the Senate, where major changes are expected. Initially there was a general consensus that the final version of this legislation would be completed and signed into law by the President by the end of July, before Congress leaves for its long August Recess.  There is now a reasonable chance that some of the provisions in the House-passed bill will be addressed before the August Recess, with others left for Congress’s return in September. Some of the Congressional urgency of this bill decreased with the better-than-expected employment numbers in the latest jobs report.

As the Senate considers the HEROES Act, one area of particular focus for TNPA has been the effort to make the Universal Charitable Deduction permanent and raise the $300 cap. There is no provision in the House-passed HEROES Act addressing the Universal Charitable Deduction. However, there has been quite a bit of effort by a bipartisan group of six Senators who are strong supporters of making the deduction permanent and raising the cap.

On June 22, Senator James Lankford (R-OK) introduced S. 4032, which would make permanent the Universal Charitable Deduction and tie the cap to 1/3 of the standard deduction, which equates to approximately $8,000 for a married couple filing jointly and approximately $4,000 for an individual filer. The five other Senators among the group of six Senators are cosponsors of the Lankford bill: Senators Chris Coons (D-DE), Mike Lee (R-UT), Amy Klobuchar (D-MN), Tim Scott (R-SC), and Jeanne Shaheen (D-NH).

On July 17 the Federal Reserve announced modifications to its proposed Main Street Lending Facility for nonprofit organizations. While making some modest changes to its original proposal, the Fed’s lending facility unfortunately will provide only limited benefit to the nonprofit community. Specifically, the latest proposal slightly changed the requirement for eligibility to the loan program for “non-donation revenues” from 70% of expenses to 60% expenses. Thus, any nonprofit that receives over 40% of its revenues from donations will NOT be eligible to participate in the Fed’s lending program.

TNPA was among the signers on a multi-organizational letter calling on Congress to broaden the eligibility to the Fed’s Nonprofit Main Street Lending Facility, as well as advocate for loan forgiveness under the new Fed lending facility — similar to the loan forgiveness provisions under the PPP loan program. 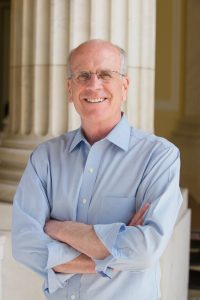 The Nonprofit Alliance has worked closely with Congressman Peter Welch of Vermont. Congressman Welch has had a distinguished career in elective office, having served in the Vermont State Senate for 14 years. He was elected to the Vermont Senate in 1980 and later was selected to lead the chamber, becoming the first Democrat in Vermont’s history to hold the position of Senate President Pro Tem. In 2006, he was elected to represent Vermont in the U.S. House of Representatives. Throughout his career, Congressman Welch has always focused on helping those most vulnerable among us. One area of particular concern for the Congressman has been his long-time focus on caring for America’s veterans and their families – particularly their often difficult transition from serving in uniform to returning home. Throughout the current global health crisis, Welch has strongly advocated for those in need by supporting food security initiatives and other programs to directly help Vermonters during this unprecedented time. Many of these programs are administered locally by nonprofit organizations.

Congressman Welch serves on the Energy and Commerce Committee, the House committee with jurisdiction over legislation impacting data and privacy – an issue area impacting the entire nonprofit community. Importantly, he has been a leader in the area of data/privacy and throughout his career has introduced several pieces of bipartisan legislation. The legislation has focused on striking the fine balance between effectively protecting the privacy and security of individuals’ information while allowing the legitimate use of data that is critical for nonprofits to secure resources and more effectively carry out their missions.

The Nonprofit Alliance looks forward to continuing to work closely with Congressman Welch.