“The time to buy is when there’s blood in the streets.” — Baron Rothschild.

Eventually, Team Human will prevail against COVID-19.  The question is how many irreplaceable lives and how much uncountable treasure we will lose in the fight.  In short, how long and bad is “eventually”?

Many of our organizations are on the front lines fighting this disease or in the tents caring for those impacted.  Others work to sustain themselves while the spotlight is justifiably elsewhere.  Both are doing so without several arrows from our normal quivers.  No canvassing.  No events.  No personal contact major gifts fundraising.

And yet investing in our donors—acquiring them and keeping them—is still the best investment going, with better returns than stocks and greater security than treasury bills.

In some areas, this manifests in better opportunities than we (hopefully) will see for as far as we can foresee.

Digital fundraising.  Google makes almost 40% of its revenues from retail, restaurants, travel, automotive, and small business ads.  (Worry more about these sectors than about Google, who made it through the Great Recession fine back when it was far less diversified.)

(Side note: vacation packages only cut in half?  It’s going to take a while for Team Human…)

The same sector-by-sector look, however, found that nonprofits saw a 10% increase in impressions and a 20% increase in conversion rates.  And additional data shows that we are far outpacing our for-profit brethren and sistern in click-through rates: 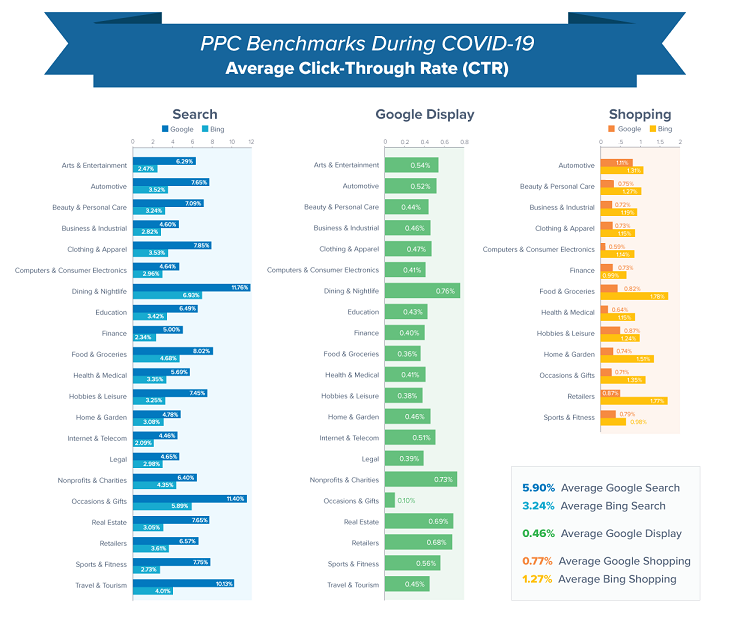 (Hat tip to Business2Community for the data)

And as entire sectors drop out of competition, the average cost-per-click we’re paying is decreasing.

So, lower costs, higher click through rates…  Am I going to see fewer people?

Nope.  Google Display Network traffic is up 26%.  YouTube is up by 36%.  And Facebook is having record usage (and is having the same lower cost/higher click-through experience as Google).

As if it wasn’t enough that you can get more people to click more often on ads that are cheaper, the type of traffic should be more valuable.  As the 2020 M+R Benchmarks show, about half of nonprofit website traffic is usually mobile traffic.  Yet, 69% of donation revenue comes from desktops, with desktops having more than twice the average gift of a mobile device.

It’s difficult to tell how much of this is the person using the device or the experience on the device itself, but the COVID-19 traffic to sites is skewed toward desktops, reversing a long-standing trend.

Thus, digital acquisition (and conversion to monthly giving) is ripe for investment right now.  But digital is not the only place where a lower cost, greater viewing, higher engagement rate is being found.

Greater viewership?  Check.  Even though the increase has leveled off, Americans have doubled their streaming intake year-over-year.  And traditional TV viewership is up 60%.

More valuable viewership?  Check.  Viewership is skewing toward news networks and comfort/feel-good viewing according to iSpotTV.  All are good programming for nonprofit DRTV spots.  Historically, things like sports programming are not as good for recruiting donors.  You can guess where sports programming is right now.

Decreasing prices?  Check.  Ad spending has decreased 41% on TV, according to the IAB.  At DDTV (full disclosure: a Moore company), we are seeing rates for some traditional TV channels drop rates by 30 to 50%.

Is it an expensive investment?  Yes.  But your reach for your dollar is not nearly what it once was, when you were competing against Royal Caribbean and your local Ford dealership for the ad space.  And DRTV scales magnificently once ads succeed.

People.  Back in February, a mere 393 months ago in feels-like time, this was the headline on CNBC: It’s never been this hard for companies to find qualified workers.  Companies were bemoaning the difficulty in finding talented workers at historic rates: 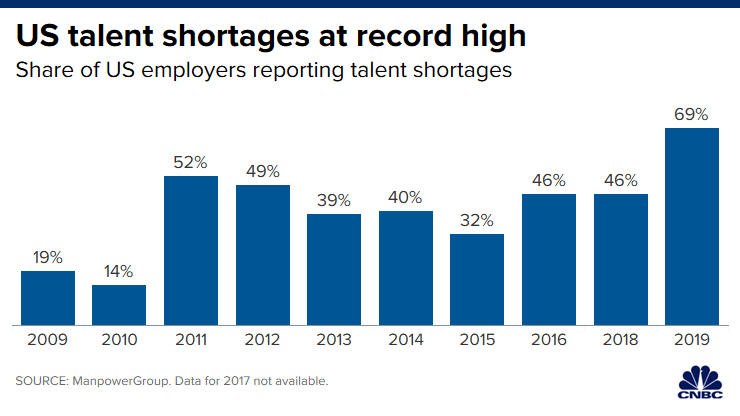 No longer.  Talented people are now being cut through no fault of their own.

Earlier, I said that donors are the best investment you can make; it’s arguable that these people may even surpass that.

Unlike in these other areas, you are best off if you don’t try to get these assets at a lower price than usual.  Rather, take advantage of the rare opportunity that such talents are available for the hiring and snap them up.  And take care of your own people.  They will get you through this crisis and you will have a bond because of it.

By: Mark Micali This post was updated on 4/23/20 when the additional aid bill was…

The Nonprofit Alliance supports responsible legislation that will give consumers accessibility and control. Members of…