Congress Will Return Mid-November for a Lame Duck Session

Congress is currently in adjournment allowing members of Congress to go home to campaign for the November elections. When Congress returns in mid-November for its post-election lame duck session, it has the immediate task of passing a funding resolution to keep the government running. The current funding authority expires December 16.

We also expect that Congress will address other issues, including two items important to TNPA: renewing the expired Universal Charitable Deduction and expanding the current IRA Charitable Rollover.

Expanding the IRA Charitable Rollover – Congress is also expected to expand the IRA Charitable Rollover during the lame duck session by increasing the current maximum annual contribution from $100,000 by indexing it to inflation as measured by the Consumer Price Index (CPI). This provision is incorporated in H.R. 2954, the Securing a Strong Retirement Act, which also includes a number of other retirement-related measures. This would be a victory for the nonprofit sector!

Comprehensive National Privacy Legislation is still considered a “next year” issue. H.R. 8152, the American Data Privacy & Protection Act, which was reported out of the House Energy & Commerce Committee is unlikely to come to the House floor during the lame duck session. Even if the House were to pass the legislation, there appears to be little chance of Senate consideration this year.

TNPA believes the legislation in its current form has several major flaws. First, it includes a “carveout” allowing portions of 15 separate state privacy-related laws to continue even after enactment of the federal statute, perpetuating the current patchwork quilt of varying state privacy laws. The bill also includes a private right of action, which could result in a proliferation of class action lawsuits, many of which will be frivolous.

National privacy legislation seems to be following the pattern of most other comprehensive far-reaching measures by taking several years before achieving enactment by Congress. TNPA is in this for the long haul and has built important relationships with many of the key players on the privacy front — on both sides of the aisle and in both the House and Senate. We expect to be back at it again next year with TNPA’s number one legislative priority continuing to be enactment of robust, bipartisan national privacy legislation.

Join Us for “Where Now? Assessing the results of the Midterm Elections”

Thursday, November 10th, 12:00PM to 1:00PM Eastern, TNPA members are invited to join TNPA’s Vice President of Government Affairs Mark Micali, as he hosts Sandra Swirski, founder and CEO of Integer, a DC-based policy firm, and Amy Tejral, a founding partner of Avenue Solutions, a DC-based advocacy firm. They will share the insider’s view of the election results and their impact on the nonprofit sector.

For TNPA members only. FREE.

Nonprofit organizations process and store enormous amounts of data on donors, members, and clients. Cybersecurity is an issue which simply cannot be ignored. A data breach not only can harm your organization, it can put you out of business. Take a look at the new page on our website.

The recent work of TNPA’s Cybersecurity Brain Trust includes a “Roadmap to Data Security for the Nonprofit CEO,” as well as an important piece on “Considerations for Nonprofits in Their Partnership Agreements.”

In the DC-Metro Area Nov 15 or 16? Join us to Lobby for the Universal Charitable Deduction

We continue to follow legislation in the states. Read more about new state laws and proposed state bills that could impact the work of the nonprofit sector on the TNPA website.

Read more under Legislation in the States.

Mastercard has revised their new regulations: Nonprofits that maintain low chargeback rates are not required to comply with the new recurring payment rules. THANK YOU to all the TNPA members, partners, coalition members, and allies of the nonprofit sector for joining together around this issue.

Read more (including a link to the Mastercard Revised Rules) on TNPA’s website.

The October 31 deadline to submit your student loan debt to be qualified for debt forgiveness is quickly approaching! The Federal Public Service Loan Forgiveness (PSLF) Program allows individuals who have worked a minimum of 10 years for a 501c3 nonprofit organization or government entity (state, local, federal, or tribal), AND have made student loan payments for 120 months (10 years) to have their remaining student loan debt forgiven.

This program offers an important benefit for recruiting staff into the nonprofit sector. It is a means for nonprofits to compete with, or at least offset, the higher salaries offered in the private sector. Of course, it only works as an incentive if it is made known, both to nonprofits and to potential candidates to work in the nonprofit sector.

TNPA is in partnership with PSLF.us to get the word out! Visit https://tnpa.org/policy/pslf/ to access information for individuals and employers to share with staff.

TNPA’s Vice President of Government Affairs, Mark Micali is here to keep you in the loop on what is happening on Capitol Hill on issues important to the nonprofit sector. Click here to hear Mark’s expectations for the mid-term elections and the following lame duck session.

The Nonprofit Alliance will introduce you to one member of Congress who is a leader on legislative matters important to our TNPA community, with representatives from both parties. 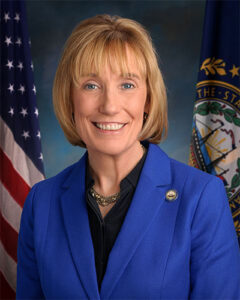 The Nonprofit Alliance has enjoyed working with Senator Maggie Hassan of New Hampshire. She was elected to the U.S. Senate in 2016 and has consistently worked across the aisle to get results for her state and the country. She is the second woman in American history to be elected both Governor and United States Senator, along with fellow New Hampshire Senator Jeanne Shaheen. As someone committed to bipartisan solutions to our nation’s challenges, she helped author and negotiate the bipartisan infrastructure package enacted into law in 2021. This landmark legislation will not only repair roads and bridges, but will provide affordable high-speed Internet to communities, along with getting clean water to people’s homes. The Senator has also been a strong advocate on the issue of combating climate change, which threatens our environment and long-term economic health.

An area of genuine passion for Senator Hassan that drew her to public service was her determined efforts to fight to ensure that children like her son Ben, who experiences severe disabilities, would be fully included in their communities and have the same opportunities that all parents want for their children. In fact, in 1999 then-Governor Shaheen asked her to serve on the Advisory Committee to the Adequacy in Education and Finance Commission. Here the Senator’s experience as a business attorney and as a parent of a child who experiences disabilities enabled her to provide a unique perspective as the commission did its work.

Overall, hard work and a strong desire to help people in need has been a hallmark of the Senator’s career. The Nonprofit Alliance looks forward to continuing to work closely with Senator Hassan.