We are keeping our ears and eyes peeled, expecting the much-anticipated (and dreaded) announcement of second-in-this-year postal rate increases. We have reason to believe the announcement will come near the end of this week. We will keep you posted.

However, the legislation does NOT include a requirement that future postal rate increases cannot increase faster than the rate of inflation (the Consumer Price Index or CPI). Limiting future rate increases to the CPI is a top priority of TNPA.

On May 20, Senator Gary Peters (D-MI), who chairs the Homeland Security & Governmental Affairs Committee (HSGAC) with postal jurisdiction, introduced S. 1720, To Provide Stability to and Enhance Services of the USPS.

This Senate bill has identical language to H.R. 3076, the House postal reform bill, which as noted, was just reported out of committee.

Importantly, Senator Peters’ bill has 20 cosponsors — 10 Democrats and 10 Republicans — including Senators Rob Portman (R-OH), the Ranking Republican on the HSGAC, as well as Tom Carper (D-DE), who co-authored the 2006 Postal Reform Act, the last major piece of postal legislation enacted by Congress.

No date has been set as yet for consideration of S. 1720 by the HSGAC, however similar to Congresswoman Maloney in the House, Senator Peters has also stated that enactment of postal reform legislation is a top priority.

On May 5, the House Ways & Means Committee reported out of committee for consideration on the House floor H.R.2954, Securing a Strong Retirement Act, which among its many provisions includes an expansion of the IRA Charitable Rollover. The expansion would increase the current maximum annual contribution to an IRA Charitable Rollover from $100,000 by indexing the maximum to the annual rate of inflation (the CPI), allowing the cap to increase each year as the CPI increases. This legislation is expected to go to the House floor for consideration later this year.

In the Senate, TNPA has been working closely with Senators Kevin Cramer (R-ND) and Debbie Stabenow (D-MI), who have introduced S. 243, Legacy IRA Act, which would lower the age for establishing an IRA Charitable Rollover from 70 1/2 to 65, while raising the maximum annual contribution to an IRA Charitable Rollover from its current level of $100,000 to $400,000. As yet, no date has been set for consideration of retirement-related tax issues (including the IRA Charitable Rollover expansion) in the Senate committee of jurisdiction, the Finance Committee. However, the Finance Committee is expected to take up retirement legislation later this year.

As TNPA has previously reported, a number of planned giving experts indicate that the passing of the Legacy IRA Act could result in an additional $1 billion each year for charities.

Identical versions of the WORK NOW Act were introduced in the House, H.R. 1987 by Congresswoman Linda Sanchez (D-CA), and in the Senate, S. 740, by Senator Amy Klobuchar (D-MN).

WORK NOW establishes a grant program to provide emergency relief to nonprofit organizations, particularly those organizations whose workers are serving public needs that have increased as a result of the coronavirus pandemic and the economic crisis, by helping them scale their services and pay the wages, salaries, and benefits of existing and new employees.

Supporters are working to get this bill attached to a “must pass” bill like the infrastructure package.

The U.S. Supreme Court case on donor privacy (argued in May, decision expected in June) has brought national attention to the issue. A wave of state legislation has followed, focusing on the compelled reporting of Form 990 Schedule B information to state officials.

A “model act” entitled the Personal Privacy Protection Act (PPPA) has received wide circulation among legislatures. In simplest terms, it would prohibit state officials from routinely collecting individual donor/member information from nonprofits and would sanction any state officials who disclosed such information lawfully in their custody (the latter an analog to laws prohibiting disclosure of taxpayer information by IRS employees).

The PPPA has been enacted in South Dakota (SB103) and Arkansas (SB535). Virtually identical legislation in Tennessee (HB0159) and Missouri (SB333) has passed both houses and awaits expected signatures from the governors. A truncated version has been enacted in Oklahoma (S103). Legislation on the same subject is in various stages in at least a half-dozen additional states.

These laws embody a similar principle to that advanced by TNPA in its amicus brief filed in the Supreme Court case. Donors (and their nonprofit stewards) deserve strong protections from either the inadvertent or intentional disclosure of personal donor information. We will continue to follow developments in the states and, of course, with the Supreme Court. 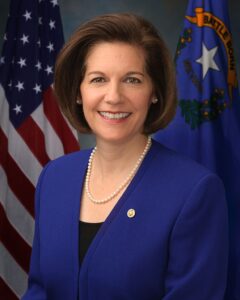 The Nonprofit Alliance has worked closely with Senator Catherine Cortez Masto of Nevada.

After serving two terms as Nevada’s Attorney General, in November 2016 she made history by becoming the first woman from Nevada and the first Latina ever elected to the United States Senate.

As Attorney General, Cortez Masto led the push to break up sex trafficking rings throughout the state. She partnered with community advocates to give first responders the tools they need to identify and intervene in human trafficking incidents. To help middle-class families recover from the housing crisis, Cortez Masto created the Mortgage Fraud Strike Force to investigate and prosecute lending scams and to protect Nevada homeowners.

She has continued to combat violence against women on the federal level, working across the aisle to address rape kit backlogs and leading efforts to reauthorize the Violence Against Women Act. Cortez Masto is ranked the third most effective Democrat in the Senate and her strong relationships on both sides of the aisle have helped her pass bipartisan legislation to combat the crisis of missing and murdered indigenous women and address the epidemic of law enforcement suicides, both of which were signed into law last year.

Senator Cortez Masto has been an important voice on one of the top priorities of The Nonprofit Alliance — allowing all taxpayers, regardless of their level of income, to claim a tax deduction when making charitable contributions. The Senator is a cosponsor of S. 618, the Universal Giving Pandemic Response and Recovery Act. This bipartisan bill would provide tax benefits for the 88% of Americans who do not itemize their taxes and thus may not claim a deduction when they support charitable causes. Importantly, with the Senator serving on the Finance Committee — the committee of jurisdiction for this legislation — having her support for this measure is a real plus!