It might seem like a positive step that the House Energy & Commerce Committee reported out for consideration on the House Floor H.R. 8152, the American Data Privacy & Protection Act, but full enactment of comprehensive national privacy legislation this year appears less and less likely.

National privacy legislation is a top priority for TNPA. However, we have significant concerns with this particular bill as currently reported out of the House committee.

First, the bill does NOT have a clear federal preemption of current or future state privacy laws. If that wasn’t bad enough, it includes a “carveout,” allowing portions of 15 separate state privacy laws to continue even after enactment of the federal statute. This would continue the unfortunate patchwork quilt of regulations that we want to avoid.

In terms of where do we go from here…TNPA is hearing from more and more Senators, including Senator Jerry Moran (R-KS), a key player on the privacy issue, that it is very unlikely, even if the House passes its current bill (H.R. 8152), that the Senate will take up the legislation this year.

On behalf of our members and the nonprofit sector as a whole, TNPA continues our active dialogue on Capitol Hill to advocate for robust, carefully crafted, bipartisan national privacy legislation — continuing to build bridges with key Senators and House members on this important issue.

We continue to follow legislation in many states. For more details and additional state bills that could impact the work of the nonprofit sector, as well as links to the actual bills, visit our States Policy page.

New Hampshire SB 302/Chapter 336 was signed by Republican Governor Chris Sununu on July 25, 2022, and takes effect January 1, 2023. The law will prohibit a public agency from:

TNPA is in conversation with the Colorado Attorney General as the office works to write the rules for the new Colorado Privacy Act.

Both commercial data companies and nonprofits have a clear stake in the rulemaking outcome. Unlike other state laws related to privacy, this Colorado law makes no distinction between commercial entities and nonprofits and will potentially impact any organization having 25,000 or more Coloradans in its databases. Several of TNPA’s Colorado based members are actively engaged in this conversation.

In addition to the unique treatment of nonprofits, the Colorado law could also be interpreted to have a very broad reach, extending to companies and organizations outside the state. The extent to which “processors of data” (as opposed to “controllers of data”) will be governed by the law is uncertain. These questions could be settled by this rulemaking.

To get involved or for more information, contact TNPA’s General Counsel Robert Tigner at rtigner@tnpa.org.

The Big Question: Do these regulations cover nonprofits?

At TNPA, we are working for a more definitive answer and to educate Mastercard about the unnecessary burden that would put on nonprofits. Our collection of data (thank you to so many members and supporters from across the sector for contributing to this data) shows that the rate of chargebacks for nonprofit recurring donors is minimal (if not miniscule). Yet, these regulations create a burden that would impact our ability to deliver on our missions.

We are following several paths at Mastercard in hope of obtaining a definitive answer soon.

In the meantime, please support this message and help get Mastercard’s attention by signing this letter so Mastercard will see the breadth of impact on the nonprofit sector.

TNPA’s Vice President, Government Affairs, Mark Micali is here to keep you in the loop on what is happening on Capitol Hill on issues important to the nonprofit sector. Click here to watch the video for this month’s legislation update.

The Federal Public Service Loan Forgiveness (PSLF) Program allows individuals who have worked a minimum of 10 years for a 501c3 nonprofit organization or government entity (state, local, federal, or tribal), AND have made student loan payments for 120 months (10 years) to have their remaining student loan debt forgiven.

As great as that sounds, awareness and usage of the program is low. In fact, the US Department of Education has identified an estimated 100,000 nonprofit and public service employees who likely, collectively, qualify for about $6.2 billion in student loan debt forgiveness. That means an estimated $6.2 billion of loan forgiveness is still left on the table, much of which nonprofit workers could benefit from at a time of record decreases in the nonprofit workforce.

If you have benefited from the PSLF, please take two minutes to provide some information about the experience. Your insights will help us create greater awareness of the program as a nonprofit employee benefit opportunity. Thank you! 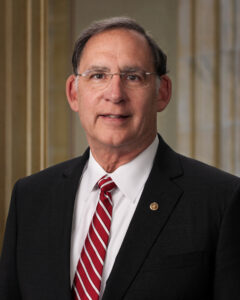 The Nonprofit Alliance has worked closely with Senator John Boozman of Arkansas. Senator Boozman came to Congress with a very interesting background. He played football at the University of Arkansas, while completing his pre-optometry requirements. He then graduated from Southern College of Optometry in 1977 and immediately entered private practice, co-founding a family business with his brother that would ultimately become a major provider of eye care to northwest Arkansas. His experience as a successful healthcare provider and small business owner served him well when he decided to enter public service and was elected to the U.S. House of Representatives in 2001. In the House, he served as Assistant Majority Whip and chaired the Veterans’ Affairs Economic Opportunity Subcommittee, where he led the passage of bills expanding services for unemployed veterans.

In 2010, Boozman was elected to the U.S. Senate where he continued his efforts to help veterans by authoring legislation to bolster care for women veterans, modernizing the GI Bill of Rights, and providing mental health care to former service members. The Senator currently serves as the Ranking Member on the Agriculture, Nutrition, and Forestry Committee where he plays a key role influencing policy that relates to the agriculture economy, nutrition programs, and quality of life in rural America.

The Nonprofit Alliance knows the Senator best for his support of legislation critical to the nonprofit sector — legislation to provide for a universal charitable deduction open to all taxpayers, regardless of their income, for contributions made to charities. With currently only 12% of taxpayers itemizing their taxes, absent the universal charitable deduction, the other 88% of taxpayers would receive no tax benefit when making charitable contributions.

Overall, hard work and a strong desire to help people in need has been a hallmark of the Senator’s career. The Nonprofit Alliance looks forward to continuing to work closely with Senator Boozman.

Mark Micali
Legislative Round-Up
No Comments on Legislative Round-Up | December 2022
Congress Heads Toward Adjournment for the Year | On December 15, Congress passed a short-term funding resolution to continue funding the federal government through December 23, and now, just this morning, Congress introduced a bill to fully fund the government for the remainder of the fiscal year (until September 30, 2023). This year's lame duck session has been pushed unusually close to Christmas! We'll all be watching carefully as Congress votes on this budget and officially closes out the 117th Congress....
Read more

Mark Micali
Legislative Round-Up
No Comments on Legislative Round-Up | October 2022
Congress Will Return Mid-November for a Lame Duck Session | Congress is currently in adjournment allowing members of Congress to go home to campaign for the November elections. When Congress returns in mid-November for its post-election lame duck session, it has the immediate task of passing a funding resolution to keep the government running. The current funding authority expires December 16....
Read more
Copyright The Nonprofit Alliance - All Rights Reserved 2022
1319 F St. NW, Suite 800 | Washington, DC 20004 | 202.516.5886 | membership@tnpa.org