After several rather quiet weeks when state legislatures were shut down, there is a little bit of movement to report this month.  Still, it’s nothing like a normal year.  On Capitol Hill, the big news is the House’s HEROES Act, a package loaded with relief and aid provisions that are expected to be sharply reduced in the Senate.  More on that below, but first let’s take a look at the state updates.

More than half of the states with solicitation law reporting requirements have recently adjusted filing deadlines and fees, due in part to the early recognition by the IRS that pandemic conditions required a relaxation of filing deadlines for the Form 990.  The National Association of State Charity Officials (NASCO) provides a chart that inventories the state-by-state changes.  Note the column marked with a red arrow.

California AB 2208 passed the Assembly Judiciary Committee on May 12 and is now pending in the Senate Appropriations Committee. As recently amended, the bill would establish new requirements for charitable fundraising platforms:

TNPA is part of a stakeholders group that is providing comment to this bill, with specific interest in clarifying intent and definitions.  In its attempt to address a specific problem this bill is, unwittingly, creating new ones.

California AB 2936 also passed through Assembly Judiciary on May 12 and awaits action from Assembly Appropriations. The legislation creates a distinct reporting category within the solicitation law for DAF sponsoring organizations. The nature and extent of the reporting is not specified and is left to rulemaking by the Attorney General.

It is possible the sponsor and proponents have plans to introduce amendments later in the process which could address such things as mandatory payouts.

Californian’s for Consumer Privacy announced that they have submitted over 900,000 signatures for verification in order to qualify the California Privacy Rights Act (CalPRA) for the November ballot. According to the National Law Review, if the petition signatures are verified, which will be decided by June 25, then the act will appear on the November ballot. The initiative would make numerous changes to the CCPA including:

A complete list of differences between the CCPA and CalPRA prepared by initiatives organizers can be found here.

California requires about 600k unique petition signatures in order to qualify a ballot initiative.  The 900k signatures need to be verified to rule out, to the extent possible, duplicate signatures and “Donald Duck” autographs.  Based on past experience and the rate that individual petitions are disqualified, the 900k is cutting it pretty close.  The covid-19 shut down curtailed what otherwise could have been a much stronger submission.

California AB 2751 was amended and re-referred to the Assembly Privacy and Consumer Protection Committee on May 5. The bill would amend the definition of deidentified data under the California Consumer Privacy Act to mean information that cannot be used to infer other information about, or otherwise linked to, a particular consumer, contingent on the business taking reasonable measures including:

This change would more closely align the state’s definition of deidentified data with the definition currently used by the FTC — something we deem to be a step in the right direction to avoid conflicting requirements.

During the hearing the bill was deferred and is not expected to be considered again this session.

View our State Data Privacy Quick Guide, based on bills that dropped prior to shut downs.

Pennsylvania HB 2507, sponsored by Rep. Joe Ciresi, D-Limerick, was referred to the House Commerce Committee on May 13. The bill, to be known as the “Banking on Nonprofits Act” would permit state chartered banks and credit unions to offer loan deferrals, repayment plans and loan modifications to eligible nonprofits. Nonprofits would be deemed eligible if they demonstrate that they have been adversely impacted by COVID-19 and if they are current on their loan or mortgage with the state-chartered institution. If the nonprofit fails to fulfill the terms of the plan or modification, they would be subject to penalties. The bill would expire two years after it takes effect.

On May 15 the House passed the Health and Economic Recovery Omnibus Emergency Solutions—HEROES—Act. This $3 trillion bill is the largest aid package in history. This legislation is effectively a starting point for negotiations with the Senate, where major changes are expected to be made.

Senate Majority Leader McConnell, while not specifically giving a timetable for Senate action, has strongly indicated that final action by the Senate on the bill will not occur until well into June.

Small Business Loan Forgiveness – Good news on this front! While the $2.2 Trillion CARES Act limited eligibility for small business loan forgiveness to 501(c)3 nonprofit organizations of 500 or fewer employees, the House Bill opens up the loan forgiveness program to all 501(c)’s regardless of the number of employees, with two exceptions:

Loan Forgiveness for Nonprofit Organizations With Over 500 Employees Through the Federal Reserve – Fed Chair Powell has publicly stated that the Fed knows little about the mechanics of the nonprofit community. With that in mind, the House bill requires the Fed within 5 days of enactment of this legislation to “create a loan option tailored to the unique needs of nonprofit organizations” with loan forgiveness of loans (similar to the Small Business Loan Forgiveness Program) if the nonprofit “predominantly serves low-income communities” as defined by the Fed. At this early stage, it is uncertain how the Fed will define what constitutes serving low-income communities. When the bill reaches the Senate, more clarity on this definition is expected.

Funding for the Postal Service – The House bill calls for a direct appropriation of $25 Billion for the Postal Service. It should be noted that the USPS currently has a $14 Billion loan facility with the Treasury, including $10 Billion designated in the CARES Act, that it has yet to draw upon.

Making Permanent the Temporary $300 Universal Charitable Deduction, and Ideally, Raising the $300 Cap. There is no provision in the House bill addressing the universal charitable deduction. However, when the bill reaches the Senate, there is a bipartisan group of six Senators – Senators: James Lankford (R-OK), Chris Coons (D-DE), Tim Scott (R-SC), Amy Klobuchar (D-MN), Mike Lee (R-UT), and Jeanne Shaheen (D-NH) – who are strong supporters of making this deduction permanent, as well as raising the $300 cap.

TNPA will continue to provide updates on the Senate’s response to the HEROES Act. 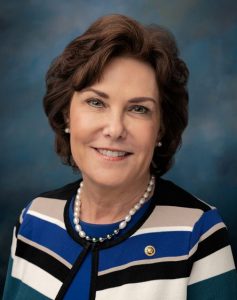 The Nonprofit Alliance has worked closely with Senator Jacky Rosen of Nevada. Senator Rosen was elected to the House in 2016, and then in 2018 became the first woman in history, as a freshman in the House, to be elected to the Senate. She brings to her service in public life an interesting and unusual background as a former computer programmer and systems analyst for some of Nevada’s largest companies. In fact, her background in computer technology has been a genuine plus in working with the Senator on often complicated data-privacy issues before the Senate Committee on Commerce, of which she is a member. Senator Rosen’s other committee assignments include: Health, Education, Labor, and Pensions (HELP), Homeland Security and Government Affairs, Small Business and Entrepreneurship, and Aging.

As a member of the Small Business and Entrepreneurship Committee, the Senator was active on the Small Business Loan Forgiveness provision of the recently-passed $2.2 Trillion CARES Act. Specifically, this provision was of great benefit to 501(c)3 nonprofit organizations with 500 or fewer employees, allowing forgiveness of loans when applied principally toward retaining employees making $100,000/year or less. During her first year in the Senate, she introduced her bipartisan Building Blocks of STEM bill, legislation aimed at introducing young children to STEM at an early age, and the bill was signed into law. When she was in the House of Representatives, the Senator also introduced bipartisan legislation to improve the Veterans Administration that was signed into law as part of the overall VA reform package. And as was the case in the House, and now as a Senator, she has been one of the most bipartisan freshmen members of the Senate, having introduced and co-sponsored numerous bills alongside Republican Senators.

The Nonprofit Alliance looks forward to continuing to work closely with Senator Rosen.

View our State Sales Tax Guide for out of state direct mail.