To say the least, a lot is going on in Washington these days!

In terms of the “mega” issues, there is the $1.2 trillion Infrastructure Package, along with the $3.5 trillion Reconciliation Package. As the late Senate Republican Leader Everett Dirksen used to say, “A billion here, a billion there, pretty soon it adds up to real money.” Well, now we need to paraphrase Senator Dirksen’s quote and insert the word “trillion.”

But while these mega issues are grabbing all the headlines and taking up most of the bandwidth in Washington, the legislative challenges facing the nonprofit sector haven’t gone away… Here is a break down of how TNPA continues to work on your behalf.

On September 13, the oral argument took place before the Federal Court of Appeals in Washington, DC, regarding the suit filed by the Alliance of Nonprofit Mailers, with the support of TNPA (as an “intervenor” in the case), along with other mailer organizations.

The suit claims the Postal Regulatory Commission’s granting of authority to the USPS to raise postal rates beyond the rate of inflation (as measured by the CPI) actually violates the limit set in law, and creates an authority not found in the Postal Reform Act of 2006. While the decision of the Appeals Court is impossible to predict, the attorney arguing on behalf of our suit made a strong case before the court. We expect a decision later this year or early next year.

Concurrently, our dual-front strategy on postal issues also includes legislative advocacy. The postal reform legislation currently before Congress includes several positive provisions — including moving the enormous postal retiree healthcare cost away from the USPS and on to Medicare where most retiree healthcare costs reside. However, the current legislation DOES NOT stop future postal rates from increasing faster than the CPI.

TNPA will be hoping for the best in terms of the court decision, but planning for the worst. Accordingly, we will continue our dialog with legislators that we need postal reform legislation that protects nonprofits and the social sector from excessive future postal rate increases.

Learn more about rising postal rates and how these apply to your own mailing and budgeting: Need to Know: Changes to First Class Mail Standard and Plan for the next USPS Price Change: July 2022.

The current Universal Charitable Deduction, which is $300 for individuals and $600 for married couples filing jointly, is scheduled to expire on December 31, 2021.

One of TNPA’s top priorities is to extend the current deduction into tax year 2022, and ideally increase the current cap on this deduction.

To that end, TNPA owes special thanks to Senators James Lankford (R-OK) and Chris Coons (D-DE), the leaders in the Senate on this issue. The momentum behind their legislation continues to grow and there are now 12 Senators who have cosponsored the Lankford/Coons bill. See below for the Congressional Spotlight on Senator Coons.

National privacy legislation appears to be the most direct casualty of the crowding out by the multi-trillion budget issues.

In fact, in the Senate, much of the $1.2 Infrastructure bill falls under the jurisdiction of the Senate Commerce, Science & Transportation Committee — the same Senate committee which has principal jurisdiction for data/privacy legislation. Nonetheless, Senate Commerce Committee Ranking Republican Roger Wicker (R-MS) and fellow Commerce Committee colleague Jerry Moran (R-KS) continue to call on their colleagues to move forward with badly needed national privacy legislation. TNPA has worked closely with both Senators on the privacy front.

Oklahoma pre-filing: The Oklahoma Computer Data Privacy Act of 2022 has been pre-filed so as to be in process when the legislature convenes in February.

And more… We continue to follow legislation in many states. For more details and additional state bills that could impact the work of the nonprofit sector, as well as links to the actual bills, visit our States Policy page. 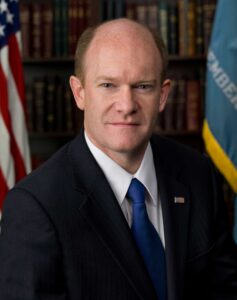 The Nonprofit Alliance has worked closely with Senator Chris Coons of Delaware. Senator Coons was first elected to the Senate in 2010 to finish the remainder of then-Vice President Joe Biden’s Senate term. He went on to be reelected in 2014 and again in 2020. Prior to his election to the Senate, Senator Coons served in county government — first as Council President and then as County Executive for New Castle County.

Prior to his service in elected office, the Senator worked on a diverse array of issues in the course of his career. He graduated with a degree in chemistry and political science from Amherst College where he was awarded the prestigious Truman Scholarship. The program allowed him to spend one year abroad studying at the University of Nairobi in Kenya — an experience which sparked the Senator’s deep interest in Africa. He then went on to Yale where he received both his law degree and a master’s in ethics from the Yale Divinity School. After law school, the Senator clerked for U.S. Court of Appeals Judge Jane Richards Roth, which was followed by his work for the “I Have a Dream” Foundation, a youth-focused education program, and with the National Coalition for the Homeless. The Senator’s career then included eight years as in-house counsel for a Delaware-based manufacturing company.

Now, as a member of the Senate Appropriations, Foreign Relations, Judiciary, and Small Business & Entrepreneurship Committees, and chair of the Ethics Committee, the Senator has been able to draw on his very broad set of skills. On the Foreign Relations Committee, Senator Coons is one of the committee’s most traveled members, leading delegations on critical issues across Africa, the Asia-Pacific, Europe, and Latin America. To the Judiciary Committee and his role as chair of the Ethics Committee, the Senator brings an astute legal mind and his experience as counsel at a major company. On the Small Business & Entrepreneurship Committee, the Senator has worked closely with Delaware small businesses to improve access to capital and deliver needed support, particularly during the pandemic where he helped craft the Paycheck Protection Program and the debt relief program for SBA loan borrowers.

The Nonprofit Alliance has worked closely with Senator Coons in his role as the lead Democrat on the Universal Giving Pandemic Response and Recovery Act (S. 618). This bipartisan legislation, which Senator Coons introduced along with Senator James Lankford (R-Okla.), would raise the current cap on deductions for charitable contributions for all Americans from $300 for individuals and $600 for married couples filing jointly to roughly $4,000 for individuals and roughly $8,000 for married couples while also extending the availability of the deduction—which is set to expire on December 31—through the 2022 tax year. This legislation is extremely important to the nonprofit sector because the 2017 Tax Reform Act substantially increased the Standard Deduction; and as a result, only 12% of taxpayers still itemize their deductions and thus are entitled to a tax deduction when making a charitable contribution. Senator Coons was also instrumental in repealing the Unrelated Business Income Tax (UBIT) of 21% on charitable nonprofits, houses of worship, and foundations in 2019 through another bill he authored with Senator Lankford called the LIFT for Charities Act.

Senator Coons has lived a life of service in support of those in need. The Nonprofit Alliance looks forward to continuing to work closely with Senator Coons.