My (virtual) Day on the Hill

As many nonprofit fundraisers were working away on their laptops to provide projections to their finance committees to show the implications of the recently announced postage rate increases, some of us were on Zoom calls with U.S. Senators who are co-sponsors of the current postal reform legislation, letting them know just how detrimental these postage hikes would be for charitable organizations…  Read more…

TNPA was Back on Capitol Hill… Talking “Postal”

On June 22, a group of TNPA members and staff met with five Senate offices as part of TNPA’s Capitol Hill Day. Our last four Hill Days, including this one last week, have been virtual. Hopefully, in the not-too-distant future, Congress will open up, permitting us to advocate in-person.

All five of our meetings were with Senate offices, and in each case the Senator was a co-sponsor of S. 1720, the Postal Service Reform Act of 2021. This legislation is identical in language to the companion House Postal Reform Bill (H.R. 3076, which was already reported out of Committee and is awaiting consideration on the House Floor). However, a number of the people we met believe that the Senate bill may be amended—and perhaps significantly altered—as it makes its way through that chamber. The Senate bill was introduced on May 20 and has yet to be scheduled for consideration by the Senate committee with postal jurisdiction, the Homeland Security & Governmental Affairs Committee.

There are several positive provisions in the postal reform legislation as it is currently written:

HOWEVER, the legislation currently does NOT stop future postal rates from increasing faster than the rate of inflation (the Consumer Price Index, or CPI). Limiting future rate increases to the CPI is a top priority of TNPA and was a focus of all of our recent Hill meetings.

In each meeting, we spoke about the burden put onto nonprofits by the Postal Service’s recently announced rate increase—effective August 29—of 6.5% to 8.5% (depending on the class of mail). And that this is on top of the 1.5% CPI increase that went into effect this past January. Clearly, protection against rate increases of this magnitude in the coming years is critically important to nonprofit mailers.

One important takeaway from this Hill Day was that while the Senate committee with postal jurisdiction and the House postal committee can move forward with the legislation, the critical provision that would move postal retiree healthcare costs to Medicare will require approval of the two tax-writing committees. To that end, TNPA is also working with members of both of the Senate Finance Committee and the House Ways & Means Committee.

A highlight of the day was meeting with Senator Susan Collins (R-ME), who along with Senator Tom Carper (D-DE) were the co-authors of the 2006 Postal Reform Act. (Earlier in the year on another virtual TNPA Hill Day, we met with Senator Carper.) During our meeting, Senator Collins mentioned that we need to work the Senate Finance Committee hard to ensure that the postal retiree healthcare liability will be moved to Medicare. She also provided insights as to how to approach a number of other Senators. We concluded our meeting by appreciating her significant experience and leadership on postal issues and thanking her for being among the co-sponsors of this year’s postal reform bill.

We also met with the staff of Senator Rob Portman (R-OH). Senator Portman is a “two-fer” as he serves on both the postal committee (as the Committee’s Ranking Republican) and the tax-writing Senate Finance Committee (as a member). Accordingly, Senator Portman will be an important player when Senate Finance considers moving the postal retiree healthcare liability to Medicare.

To stay up-to-date on postal issues, or to read background and context, visit the Policy Pages on the TNPA website.

We were encouraged to see that President Biden’s Fiscal Year 2022 budget request (released May 28) did NOT include the 28% cap on itemized deductions he had been calling for during the campaign. This is good news for the nonprofit sector.

With the top tax bracket for individuals currently being 37%, capping deductions at 28% would have a chilling effect on charitable contributions.

The charitable deduction is different from other itemized deductions in that it encourages individuals to give away a portion of their income with no tangible benefit in return.

The Senate Finance Committee is close to finalizing its version of the Securing a Strong Retirement Act.

There has been a determined effort to increase the current cap of $100,000 on an annual contribution to an IRA Charitable Rollover by Senators Kevin Cramer (R-ND), Debbie Stabenow (D-MI), and John Cornyn (R-TX).

As reported in last month’s Legislative Round-up, the House Ways & Means Committee included in its version of the Securing a Strong Retirement Act package an expansion of the IRA Charitable Rollover by indexing the current $100,000 annual cap to the rate of inflation (the Consumer Price Index – CPI), allowing the cap to increase each year as the CPI increases. This legislation reported out of the Ways & Means Committee is expected to be considered on the House Floor later this year.

More to follow on this, as TNPA continues to press Congress to expand the IRA Charitable Rollover.

To reach more about the IRA Charitable Rollover, see the information on TNPA’s website.

To read background about Consumer Data Protection Legislation, go to the TNPA website.

We aniticipate a decision from the Supreme Court on this case this week, perhaps as early as Wednesday. We will keep you posted as we read and understand the decision.

To read more about the background on this case, visit the pages on TNPA’s website.

The US Supreme Court recently resolved a split in the lower courts on what technology constitutes an “automatic telephone dialing system,” also known as an ATDS or auto-dialer.

The FCC has adopted rules requiring telecommunications service providers to deploy a STIR/SHAKEN solution by June 30, 2021.

STIR/SHAKEN is a telemarketing industry initiative to restore trust in voice communications. By utilizing caller ID authentication, its goal is to prevent fraudsters from scamming consumers and businesses through robocalls and illegal phone number spoofing, while at the same time making sure that legitimate calls reach the recipient.

California AB 488 passed the Assembly on May 28 and is scheduled for a Senate hearing on June 29. It is expected to pass this summer.

Entities defined in the legislation as a “fundraising platform” or “platform charity” would now be required to register with the AG and to submit annual reports.

The legislation requires a number of compelled disclosures designed to give prospective donors adequate information (such as fees to be deducted from the intended gift, how long it may take for the beneficiary nonprofit to receive its gift, etc).

The new California categories of solicitation law oversight are unique. They exist in no other state’s law. If California’s novel approach proves itself useful, we can expect other states to follow suit. Charity officials in other states will surely be watching.

From the States: New York: Undoing the Double-Reporting Requirement

New York SB 4817A (companion A 1141A) was passed by the Senate on June 9, followed by the Assembly on June 10. The legislation was necessary to undo a rider on 2020 budget legislation inserted by Gov. Cuomo that would have required all nonprofits registered with the Attorney General under the solicitation law to also register with the Department of State.

The legislation awaits transmittal to Gov. Cuomo. He may sign it in the face of overwhelming, veto-proof votes in each house. If he does not, he has the option of allowing it to become law by neither signing nor vetoing in the ten days he has to consider legislation.

We continue to follow state legislation related to consumer data as it has come back in full force this year after legislative efforts were derailed in 2020 by the pandemic. You can read about specific state bills on the TNPA website, including AK, CO, FL, ME, NY, OK, PA, TX, VA, and WA.

New York SB 6701, known as the “New York Privacy Act” (Assembly companion A 680), is particularly worrisome as it is predicated on opt-in. It is currently being prepared for the Senate floor. 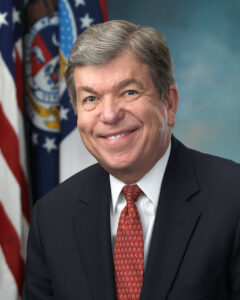 The Nonprofit Alliance has enjoyed working with Senator Roy Blunt of Missouri.

Senator Blunt was elected to the United States Senate in 2010 with a deep and varied resume that included public service, university president, and teacher. Before his election to the Senate, the people of Southwest Missouri overwhelmingly elected Senator Blunt seven times to the U.S. House of Representatives. He was elected the Majority Whip earlier in his career than any Member of Congress in eight decades, and was elected to the Senate leadership during his first year in the Senate. Before serving in Congress, Senator Blunt was a history teacher, a county official, and in 1984 became the first Republican elected as Missouri’s Secretary of State in more than 50 years. Senator Blunt also served four years as the president of Southwest Baptist University, his alma mater, in Bolivar, Missouri.

In fact, one of Senator Blunt’s most important achievements was securing six consecutive significant funding increases for the National Institutes of Health (NIH). Under Blunt’s previous chairmanship of the Labor/HHS subcommittee, funding for NIH increased by nearly 43% after more than a decade of stagnant funding. At a critical moment for biomedical research, the additional resources for NIH are advancing progress toward groundbreaking new treatments and cures for diseases like cancer and Alzheimer’s, fueling advancements in precision medicine, and helping scientists and doctors prepare for future public health challenges. Senator Blunt continues to advocate for a strong federal investment in NIH, which will help save lives and lower healthcare costs over the long term.

With the health of the Postal Service being a priority for The Nonprofit Alliance, Senator Blunt is again playing an important role on this issue, as he did earlier in his career in the U.S. House of Representatives with the enactment of the Postal Accountability and Enhancement Act. Senator Blunt is a co-sponsor of S. 1720, the Postal Service Reform Act of 2021. This legislation was just introduced last month and has yet to be considered by the Senate committee with postal jurisdiction, the Senate Homeland Security & Governmental Affairs Committee. As this legislation is considered by the Senate, The Nonprofit Alliance will be working with Senator Blunt.

The Nonprofit Alliance looks forward to continuing to work closely with Senator Blunt.

Included in this Round-Up The Multi-Trillion Dollar Mega Issues Dominate, but Progress Continues on our…

Included in this Round-Up It's a Time Like No Other in Washington... The Immediate Challenge…