Congress Heads Toward Adjournment for the Year

On December 15, Congress passed a short-term funding resolution to continue funding the federal government through December 23, and now, just this morning, Congress introduced a bill to fully fund the government for the remainder of the fiscal year (until September 30, 2023). This year’s lame duck session has been pushed unusually close to Christmas! We’ll all be watching carefully as Congress votes on this budget and officially closes out the 117th Congress.

At the end of the Congress, all legislation which has not passed “dies” and Congress starts over with a clean slate when the new 118th Congress convenes on Tuesday, January 3, 2023.

So what could happen between now and the end of the 117th Congress?

It appears the Securing a Strong Retirement Act, which includes among its many provisions an expansion of the IRA Charitable Rollover, will be enacted into law before the Congress adjourns for the year. The expansion would increase the current maximum annual contribution to an IRA Charitable Rollover from $100,000 by indexing the maximum to the annual rate of inflation (the Consumer Price Index or CPI), allowing the cap to increase each year as the CPI increases.

Passage of this legislation would be good news for the nonprofit sector. The nation has more than 56 million adults over the age of 65, the typical age to plan for retirement, plus 10,000 baby boomers who turn 70 each day!

Planned giving experts estimate this legislation could raise tens of millions of dollars for nonprofits each year in new and increased donations. (Eligibility to set up an IRA Charitable Rollover starts at age 701/2.) This IRA Charitable Rollover provision would allow seniors to use their IRA to fund a gift annuity, enabling middle-income seniors to make charitable contributions while maintaining retirement income.

The long-term and much preferred outcome is to increase the current $600/$300 Universal Charitable Deduction AND make this a permanent provision of tax law. To that end, the deduction continues to enjoy strong support, particularly in the Senate. Under the leadership of Senators James Lankford (R-OK) and Chris Coons (D-DE), the universal charitable legislation has 19 co-sponsors (of the 100 Senators), including strong bipartisan support of 10 Democrats and 9 Republicans.

The Universal Charitable Deduction, which expired at the end of 2021 is at risk of NOT being renewed for 2022. Now is the time to call your Senators (find their phone number here). Tell them this:

I care about the Universal Charitable Deduction. It is an important incentive for charitable giving that makes a difference. Please enact the Tax Extenders Bill. It’s vital to American charities!

Does the Senator have a stand on this issue? Can we count on him/her to push this forward?

Your quick call will make a HUGE difference on our ability to protect this crucial priority for the nonprofit sector! And after your call, just send Mark Micali, Vice President Government Affairs (mmicali@tnpa.org) a quick email as to how it went.

We continue to follow legislation in the states. Read more about new state laws and proposed state bills that could impact the work of the nonprofit sector on the TNPA website.

Read more under Legislation in the States.

Hill Days are an opportunity for sector leaders to share their experiences with policy-makers. Your participation plays a critical role in TNPA’s advocacy efforts and supports legislation that will help the nonprofit sector.

You do not need to be an expert on specific legislation or the Congressional process — TNPA staff will be there for that, AND to prepare you in advance.

This is also a fun, energizing day and a good networking opportunity with your professional peers. Register Here

ICYMI: Around Capitol Hill with Mark Micali in 90 Seconds

TNPA’s Vice President, Government Affairs, Mark Micali is here to keep you in the loop on what is happening on Capitol Hill on issues important to the nonprofit sector. This month is the lame duck session, Universal Charitable Deduction, and privacy legislation updates. Click here to watch.

The Nonprofit Alliance will introduce you to one member of Congress who is a leader on legislative matters important to our TNPA community, with representatives from both parties. 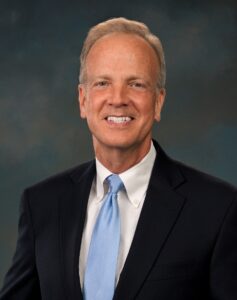 The Nonprofit Alliance has worked closely with Senator Jerry Moran of Kansas. Senator Moran has had a distinguished career in elective office, having served in the Kansas State Senate, then representing Kansas’ First Congressional District in the U.S. House for 14 years, before being elected to the U.S. Senate in 2010, reelected in 2016, and reelected in November to a third term. Throughout his career, Senator Moran has been a leader in helping people in need. Among the Senator’s committee assignments is his role serving as the Ranking Republican on the Senate Committee on Veterans’ Affairs, where he was a leader in the passage of The VA MISSION Act, which improves, expands, and modernizes the Veterans Community Care Program. Senator Moran is also Co-Chair and Founder of the Senate Hunger Caucus, and was honored by World Food Program USA with the McGovern/Dole Leadership Award for his bipartisan leadership in advancing U.S. efforts to address global hunger.

Senator Moran has also been a leader on another issue important to the nonprofit community – working toward enactment of a robust, balanced, bipartisan national privacy statute that would preempt current and future state privacy laws, resulting in one uniform set of “Rules of the Road” for the careful handling of data. This issue is critical to the nonprofit community to allow charities to efficiently find donors, while protecting the privacy of their donors. In his capacity as a member of the Senate Committee on Commerce, Senator Moran has been an important leader on this issue.

Senator Moran and his wife Robba live in Manhattan, Kansas, and he has made it his top priority to stay connected to the people he represents. Despite the distance of more than 1,000 miles between Washington, D.C., and Kansas, he returns home each weekend to meet with people from across the state. The conversations he has with Kansans during his travels around the state greatly impact the work he does in Washington.

While at home in Kansas, he volunteers his time at several community organizations. He serves on the board of trustees of the Fort Hays State University Endowment Foundation, on the executive committee of the Coronado Area Council of the Boy Scouts of America, and is a former trustee of the Eisenhower Foundation. He is also an active Lions Club member, Rotary Club member, and Sons of The American Legion member.

The Nonprofit Alliance looks forward to continuing to work closely with Senator Moran.

Mark Micali
Legislative Round-Up
No Comments on Legislative Round-Up | October 2022
Congress Will Return Mid-November for a Lame Duck Session | Congress is currently in adjournment allowing members of Congress to go home to campaign for the November elections. When Congress returns in mid-November for its post-election lame duck session, it has the immediate task of passing a funding resolution to keep the government running. The current funding authority expires December 16....
Read more

Mark Micali
Legislative Round-Up
No Comments on Legislative Round-Up | September 2022
Congress to Adjourn for Upcoming Election: Post-Election Lame Duck Session Likely | At the moment, Congress is in the midst of an impasse to enact a funding resolution to provide monies to keep the federal government running - and avoid a government shutdown - after the current funding expires at the end of the fiscal year, which is this coming Friday, September 30. Initially, it appeared that Congress would pass a "clean" short-term funding bill to fund the government until mid-December, however now it appears there is a logjam with an attempt to add a number of other provisions to this short-term funding measure....
Read more
Copyright The Nonprofit Alliance - All Rights Reserved 2022
1319 F St. NW, Suite 800 | Washington, DC 20004 | 202.516.5886 | membership@tnpa.org